•Noni trees are a medicinal fruit tree that is native to a large area across Asia and Australia.

•Noni was popular among the ancient Polynesians for its many beneficial phytochemicals and its ability to ease pain topically.

•Steve and Richele Frailey have been cultivating Noni trees on a certified organic farm in Kauai since 1982.

•Steve believes in using nature’s own methods in agriculture, and he uses no cow manure, no organic fertilizers, no organic pesticides and no added minerals.

•Steve’s farming methods are primarily based on mulch, earthworms, and rock dust, and his trees are very healthy, producing fruit all year round.

If you should have the good fortune to spend a vacation in the Garden Isle of Kauai, Hawaii, be sure not to miss the free two-and-a-half-hour tour of the Hawaiian Organic Noni Farm on the North Shore. Steve Frailey and his wife Richele have been harvesting Noni (Morinda citrifolia) on this farm since 1982, when they purchased just 20 acres to begin their adventure. Steve had studied organic farming methods in Missouri in the 1960s, and he had been harvesting fruits on his organic farm in San Diego before coming to Kauai. His Noni farm, now nestled in 70 acres of a beautiful deep valley and a bluff overlooking the ocean, is one of the best examples you will find of how to grow food not only organically but also using basic principles derived from nature. And the organic Noni Fruit Leather that is his primary product is rich in phytochemicals called iridoids, metabolites that have been shown to have neuroprotective, hepatoprotective, anti-inflammatory, antitumor, hypoglycemic, and hypolipidemic activities. Micronutrients include vitamin C, vitamin A, niacin, manganese, and selenium, but its iridoid phytochemical, deacetylasperulosidic acid, is believed to be a key contributor to its medicinal value. 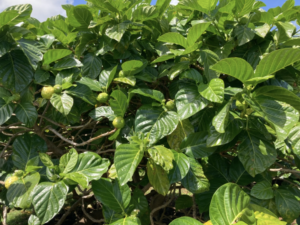 Figure 1: Noni trees can grow up to 40 feet tall. They thrive best when they are in an area with full sun exposure.

Steve discovered that Noni trees were growing wild in his valley when he originally bought the land. At the time, he was unaware of their rich history. He learned that the trees had originally been brought to Hawaii by Polynesians from the Marquesas Islands in French Polynesia. The Polynesians had valued the fruit for its medicinal properties to help heal skin irritations, arthritis and many other ailments for over 2,000 years. In times of famine, the raw food was eaten to nourish the body. In fact, Noni is native to a large area from South Asia to South East Asia to Australia and across the South Pacific Islands. All traditional cultures valued it for its extensive medicinal properties.

Scientific research has identified over 165 beneficial compounds in the raw pulp of Noni. However, Noni fruit is tricky because of fermentation that destroys most of the potency and benefits. The fruit goes from a ripe mature fruit to a fermented fruit very quickly. One of the effects of fermentation is to reduce the number of sulfur-containing esters in the fruit, as these are converted into volatile compounds and lost. In fact, Dr. Brian Issell conducted cancer research for 10 years at the University of Hawaii using only pure non-fermented Noni fruit. According to Dr. Issell, “If fermentation is allowed, then a different chemical profile is present.” In other words, Noni’s potency and beneficial compounds are destroyed through fermentation. 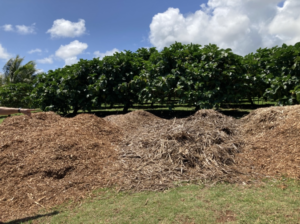 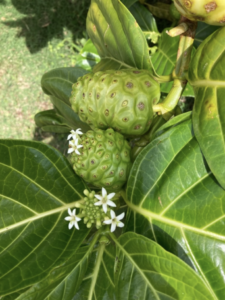 Figure 3: The Noni flowers emerge from the fruits while they are still small, a most unusual feature of these trees.

Steve’s challenge was how to prevent the fruit from fermenting. His quest was a 50-year journey of research and development, ultimately building a unique low-heat (below 115 degrees F) dehydration process. To be FDA compliant, Steve had independent lab tests conducted in California that showed that their unique process locked in the 165 beneficial compounds found in the raw pulp of Noni. The Lab tests showed that his Noni Fruit Leather has a 2-year shelf life not refrigerated and is 14 times more potent than fermented Noni juice.

Using only mature ripe non-fermented Noni that is grown on the certified organic family farm and keeping the drying temperature below 115 F preserves the maximum beneficial qualities without the use of additives or preservatives. The raw ripe fruit has a unique taste unlike any other fruits, with a distinct blue-cheese-like flavor, which gives it the nickname “cheese fruit.” The dried form’s flavor is distinct but not nearly as cheesy, and it is highly concentrated in lignans, polyphenols and flavonoids that support antioxidant defenses.

On the tour, Steve recommended a book by a Japanese scientist and farmer, Masanobu Fukuoka, titled “One-Straw Revolution,” that he had read many years ago and that was foundational to his own farming practices. The basic principle of the book is that the best forms of cultivation mirror nature’s own laws. In addition to his farm being USDA Certified Organic, Steve uses no cow manure, no organic fertilizers, no organic pesticides and no added minerals. Instead, he grows nitrogen fixing plants and trees that he uses as mulch to support the Noni trees’ nitrogen needs. From his personal experience of over 40 years of growing organically and “mimicking nature,” he uses an abundant amount of mulch in the orchards, occasional foliar spraying of compost teas, rock dust from a local quarry that is high in calcium and many trace minerals, and earthworms. 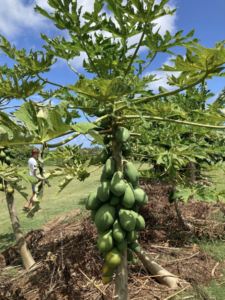 Over the years, Steve refined his agricultural practices to steadily increase yields from his trees. An extremely important part of his success story involves earthworms. On the tour, he shows the audience a large flat container full of earthworms, that he feeds regularly with pureed vegetarian food waste from the family’s meals. He adds to the worm bed shredded paper and grass from mowing the lawn. It is important to keep the worm bed damp and to keep the worms in the shade and covered loosely with a board to keep out the sunlight. The worms love the pureed food and they produce worm castings that are even better than cow manure to fertilize the Noni trees. He stated that just one cup of the worm castings placed under mulch surrounding the trunk of a Noni tree will be enough to keep the tree producing fruit the whole year round. During the show and tell on the tour about worms, Steve quotes from Charles Darwin who wrote: “There are few animals which have played so important a part in the history of the world as the earthworm.”

Noni trees are remarkably hardy. They can live up to 400 years, and the old trees still bear fruit. Noni trees are unusual in that their flowers emerge from the fruit during the early growth stage. There are abundant honeybees on the property that are attracted to the Noni flowers in a mutual relationship where the bees benefit from the nectar while helping to pollenate the trees.

Steve sells not only the Noni fruit leather, but also various topical medicinal products where Noni is the primary ingredient. Noni is especially known for its ability to reduce arthritic pain, and many athletes have learned to take advantage of it for this reason. 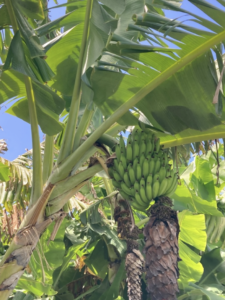 Noni is not the only crop on Steve’s farm. He also harvests apple bananas, papayas and mangoes, all certified organic.